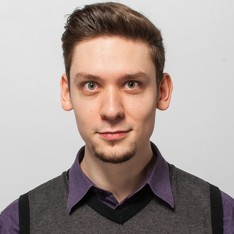 Edit: As of December 2016, things are a bit complicated – I’m going into full time employment in IT. I might be unavailable for commissions for a while, but I’ll update the site whenever anything interesting comes up.

I’m a freelancer on the move with a UK-registered business, a creative and calculating type. Polish national, currently resident; freshly graduated (2015) bachelor of science in Interaction Design. Available for hire, permamently or for single projects. Will not accept Pokemon cards as payment.

Frankly, while a “mashup artist” sounds nice, the term “video guy” might be more appropriate. I don’t see my work as “mashup”, since I prefer to dissect and rearrange material within a single source. “Remix” sounds a bit too musical. A good example of what I do is Music Videos Without Music, a series and worldwide phenomenon I started in 2012. Grab a bit of pop culture, give it a whole different context with some clever editing. But I also do commissions for classic video editing, like advertisments and promos, and I also edit a fair bit as a hobby.

You might be here because of my design or software work (I especially love it when I can combine it with some audiovisual work), and yes – I do these things, and you can see some projects on this website, although you might find mgackowski.com/design a bit more useful here.

About ten years ago I have discovered video editing, which was about the time a certain website called YouTube was gaining momentum. For over a decade now I logged in almost every day, and uploaded more than 200 videos. I remember the first ratings and comments on my videos. The ability to confront my ideas and their execution with the opinions of anyone in the world was a game-changer. Back then, I had little more than a webcam. I rarely produced my own footage. Instead, I experimented with what could be done on material I already had. I cut and spliced and rendered web promos, software intros, any video file I could find. I joined a community of remix creators and exchanged comments.

By 2012 working with video was in my blood, but I was slowing down due some extra academic work. I started a new channel to separate my niche work from videos with a more mainstream appeal. That’s when Music Videos Without Music: Gangnam Style became viral, I started taking commissions and stepped up my game. I now direct and edit video for clients who can expect professional quality work from someone who has lived and breathed Internet video for a quite some time.

Since I graduated, I am now also looking for work, not only in the field of video but also interaction design, software and user experience.

Any questions, commissions or offers? Hit me at [email protected].